Co-sleeping seems to be generating a lot of controversy lately. There have been a few infant deaths in the news recently which have been erroneously blamed on co-sleeping as well as the Milwaukee anti-co-sleeping campaign which uses pictures of babies sleeping on an adult bed alone, with pillows and blankets and a knife next to them stating "Your baby sleeping  with you can be just as dangerous". All of these incidents along with the campaign, have been giving co-sleeping a bad name in the media. However, when certain precautions are taken, co-sleeping is actually safer and better for babies than sleeping alone in a crib far from their parents. It is also important to note that the the term co-sleeping refers not only to bed-sharing but to baby sleeping next to your  bed in a crib, cot, so-sleeper,etc. Let's take a look at the many benefits of sleeping with your baby.


-A reduced risk of Sudden Infant Death Syndrome (SIDS) : Shocking, right? Contrary to popular belief, babies who sleep either in their parents' bed or next to it (in cot, crib, bassinet, co-sleeper, etc) have a fourfold decrease in their risk of SIDS. Furthermore, SIDS rates are much lower and even non-existent in countries where co-sleeping is common practice. It is believed that mom's breathing helps to regulate the baby's breathing and baby also spends more time on his back or side, therefore, reducing the risk of SIDS.

-Better sleep: Babies who co-sleep cry and startle less throughout the night than babies who sleep alone. In addition, parents don't have to get up to get get baby when he wakes during the night and, therefore, experience less sleep disruption.

-Easier breastfeeding: Since baby is already next to mom, mom can easily help baby get latched on while laying down and without either of them even fully waking up.

-Mom can respond to baby easier and faster. Because the baby is so close to mom, he does not need to resort to crying to get mom's attention, simple movement will wake mom up. Since baby is already right there, his needs can be met faster by mom.

-Higher self-esteem for baby in the future.

-Children grow up to be more independent: another shocker! Since babies needs for closeness, comfort, and security are being met, he learns to trust his parents and develops a secure attachment to them, which leads to independence as he gets older. Ignoring a child's needs and attempting to force him into independence actually causes stress and anxiety which lead to over-dependency later in life.

-Greater physiological stability: Babies who co-sleep have fewer long pauses in their breathing, a more stable temperature, and a more regular heartbeat.

-Reduced guilt and anxiety for children.

-Children grow up with less discomfort about affection and physical contact which leads to better relationships as adults.

-Mothers who co-sleep tend to breastfeed longer than those who do not.

-Parents are more attuned to their children and a more secure attachment is formed.

-There are less bedtime struggles when the child is older. Because the child has formed positive sleep associations by having his needs met from infancy, he is less likely to be afraid or have nightmares or other forms of sleep disturbance in the future.

-Co-sleeping allows working parents to have more bonding time with their child.

-When done safely, co-sleeping is actually safer for babies than sleeping alone.

As we can see, these media campaigns using scare tactics are based on faulty information. Oftentimes, they ignore the other factors that led to the infant's death such as drug abuse by the parent. In fact, sleeping with or near your baby can have many benefits for both you and baby. It is important to note, however, that certain precautions need to be taken in order to make co-sleeping safe. I will be writing about safe co-sleeping in a future post. 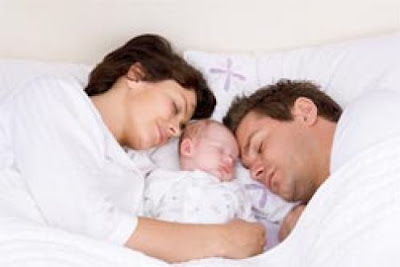 The Attachment Parenting Book: A Commonsense Guide to Understanding and Nurturing Your Baby by William Sears, M.D. and Martha Sears, R.N. (covers co-sleeping along with breastfeeding, babywearing, and other attachment parenting practices)

Gentle Birth, Gentle Mothering: A Doctor's Guide to Natural Childbirth and Gentle Early Parenting Choices by Sara J. Buckley, M.D. (not specifically about sleeping but has a whole chapter dedicated to the research studies on co-sleeping)

There are man other books that cover the research on co-sleeping but I can only recommend those that I have personally read.