August 1st-7th is World Breastfeeding Week and the month of August is National Breastfeeding Month. To celebrate, I will be posting some of my friends' and readers' stories about their breastfeeding experiences here everyday. To kick this series off, here is my friend Paula's story: 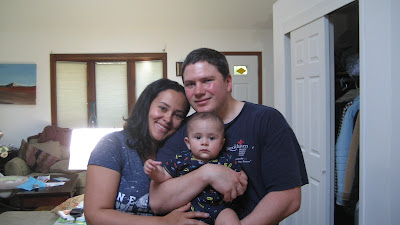 About me:
My name is Paula. I'm  28 years old. I was born and raised in Medellin-Colombia and came to the USA when I was 13 years old. At the age of 23, I married the most wonderful and understanding man in the world, my husband Chris. We welcomed our first baby in December 2011, the biggest blessing of our lives. Also, in November 2011, my mom came from Colombia and she lives with us. She takes care of our son while we are at work and she is a great help. I work full time as an RN, and my husband also has a full time job. It's hard leaving the baby while going to work but we know he's in great hands. No one is better than grandma to watch and spoil her grandchildren. Family is truly the greatest gift in life.
Posted by Taisha at 1:26 AM