Last year, my friend Gissele shared the story of how she was failed by the hospital staff and  that, coupled with her lack of knowledge, made her unsuccessful at nursing her first daughter. You can read that story here. She was pretty determined to do better next time. Tonight, she shares the story of nursing her second daughter.

On December 24th, 2012, God gave me a precious gift ! I gave birth to my beautiful daughter Kaylee. Since I became pregnant with her, I knew that I was going to breast feed. Well try to do it longer than with my first daughter and not give up. This time around, I had a better experience at the hospital and I had a lactation consultant or baby nurse. She helped me during my first few hours with Kay. She was so sweet and answered all of my questions without a problem. Kay latched on easier than Lily. Right away, I thought and said to myself "this is going to be a success!"

The next evening,  there was a new nurse. She had started to get her on my nerves, saying to give Kaylee formula because, if I didn't, she could become jaundiced. In my head, I just thought, "Oh boy, here we go again! Ugh!" I didn't listen ad kept nursing . Kaylee was a healthy baby.

When I got home, I kept nursing . It had become a little bit more of a challenge for me because I had to take care of Lily and she required so much attention as well. She missed me while I was in the hospital and had already started getting jealous. I also had people saying "You are not producing enough milk", "the baby is skinny", etc. I respected other people's opinions but I did what I thought was best for my baby and, as long as she was gaining weight and the doctor said she was perfect, nothing else mattered.

Well, as the days passed by, I was exhausted and I was pumping more than latching. Unfortunately, 2 months later, I became lazy.Feeling exhausted and overwhelmed, I just couldn't bring myself to pump all the time and I switched her to formula. I sometimes feel like a failure because I quit once again but I did it for longer this time and I didn't quit right away like I did with Lily. All I know is that, if God decides to give me another baby, I am definitely going to try to breastfeed longer. This experience was amazing! 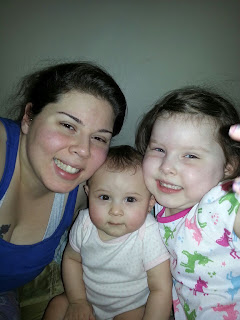 Gissele and is the mother of  two beautiful girls, a soon to be 5 year old named Lilyanna and a 6 month old named Kaylee. She's been married for 9 years to her wonderful husband and is a stay at home mom.
Posted by Taisha at 11:15 PM