To continue our World Breastfeeding Week and National Breastfeeding Month celebration, today we have a guest post by my friend Sara. Here is Sara's story of her journey of nursing her son, Nathan so far.

It was 2 in the morning when I suddenly awoke to a trickle of water coming down my leg. I immediately turned the light on and saw that my water had broken. My mom was staying with me so she could be there when I went into labor so I woke her up and told her my water broke. She then got up and was getting dressed while I went and told my husband it was time. We left the house around 4 because my husband took a long time to get up and get dressed. As we were driving to Tampa General, I was getting nervous because this was my first child and I wanted to make sure everything went well. I had no pain and the trickling stopped once we got to the hospital. Once we checked in and got seen by my obstetrician, who happened to be on call that evening, she checked me and noticed my water did break and plus they found meconium so she ordered for me to be induced.

Around 6:30 am I was finally admitted into the labor and delivery room. I was hooked up to Pitocin because I was only 2 cm dilated and 50% effaced. To make a long story short, I had my son at 8:10 pm that night. It was a vaginal birth and I did get the epidural. In my birth plan I wanted immediate skin to skin after birth. Unfortunately, because they found meconium, the NICU team took my son immediately to go get him checked out. It turned out my son was fine and he swallowed no meconium. I delivered a healthy baby boy named Nathan Anton. He weighed 7 pounds 2 ounces and was 20.5 inches long. Once they handed him back to me, I put my son up to chest to latch him on and he did. From that moment on, I knew I wanted to breastfeed, I loved the bond that I had.

That night we went to recovery to go to sleep and start our night together. I did have some trouble after birth with breastfeeding. Nathan was crying every time he would try to latch on and I got very scared. I didn't know what was going on and I thought I didn't have any milk. I was told about the colostrum by the nurse and that he would only feed for a little bit at a time but very frequently. The next day, my mom was holding Nathan and noticed that, when he cried, he couldn't lift his tongue up. She told me he was tongue tied and to ask to get it checked out. I told the nurse and they said it was common and not a big deal. To make another long story short, we were having breastfeeding problems with Nathan in the hospital until we left. I needed help with him latching because he was crying every time I placed him at my chest.

When we left the hospital to come home, I was still having issues with Nathan feeding because he wasn't latching and was crying so much. I felt so useless because I wanted to breastfeed him. I, however, gave in and gave him formula because I was getting frustrated that he wasn't latching on and I didn't know what else to do.

A couple days later we had Nathan's first appointment with his pediatrician. She too noticed that Nathan was tongue tied and wanted him to get that fixed. I told her I was trying to breastfeed but Nathan wasn't latching well and I didn't know why. She than told me it was because of his tongue. When Nathan got weighed in he had lost weight, he went from 7lbs 2oz down to 6lbs 3oz. She also noticed Nathan had a yellow tint to his face so she drew blood to check his bilirubin and it came back as a 12. She said he needed to come back the next day for another blood test. Up until that point, I hadn't realized that I could pump my milk and give it to him so that day was spent getting used to pumping every 2 hours because I was still having the same latching issue as before. Nathan had breast milk in a bottle and supplemented with formula on the side. I really thought, at this point, I couldn't breast feed my child and I felt discouraged. But deep down I wouldn't give up. I would keep offering the breast first. If that didn't work, then I would go back to pumping and formula feeding.

The next morning, we noticed Nathan's face had gotten more yellow and it looked like jaundice. Luckily, we had an appointment with his doctor. Once we got to the office and saw his doctor, her mouth dropped. She told us that he was yellow and that they needed to draw more blood. My poor baby had just come into this world and was already getting poked with needles. She sent us home and said she would call when the results come in. At 3 pm, I got a call from the doctor. She told us Nathan had jaundice caused by dehydration and we needed him to be admitted to the hospital. She also mentioned his billirubin went up to a 17. I literally cried on the way there because I wanted to breastfeed but I ended up getting my son dehydrated. I felt like a terrible mother so far. My husband reassured me that everything would be fine and that I was a great mom.

When we got to the hospital, Nathan was taken to be put under the light. We met with another doctor and told him our story and that Nathan's doctor said he was tongue tied. The doctor then told us that him being tongue tied wouldn't cause a latch problem. I knew he was lying and that that was the cause of all the problems. That whole day and night I spent pumping and having lactation consultants come in and try helping us with the latching. They couldn't understand why we were having so many problems, so I was on my own pumping and supplementing with formula to get Nathan's bilirubin down so we could go home.

The next afternoon, we were discharged because Nathan's bilirubin went from a 17 down to a 5. I was determined to keep trying with the breast first before the bottle. While at home, Paul and I then noticed Nathan couldn't lift his tongue up when he cried and we both knew that he needed to get it fixed. We did a follow up appointment and his doctor was happy to see his color was getting back to normal and asked if they clipped his tongue in the hospital. We said no and she got very upset and told us that she ordered them to get his tongue clipped and that that was why he got dehydrated. The doctor referred us to an ear, nose and throat specialist (ENT) that next day to get the procedure done. I was praying this would work. The ENT did the procedure which only lasted a couple seconds.

Once we left the ENT, we came home to try feeding Nathan. The same problem happened again. I felt so terrible about not being able to breastfeed that I was about to give up. So once again I pumped and supplemented with formula. I cried because it wasn't what I wanted. The next day, Paul told me to keep trying with my breast first before the bottle. I told him no because, at that point, I knew it was over but Paul kept telling me to try. I gave in and tried one more time. I offered my breast and, magically, Nathan latched on. No crying, no pushing away. He latched on. I cried tears of happiness because he was feeding from me and that feeling of closeness was inexplicable. I loved it. I was so happy that he fed for 30 minutes. From then up until now, Nathan nurses well and I love every minute of it. I wouldn't trade it for the world! He is gaining weight and very healthy. All thanks to getting his tongue clipped, my son and I can share these bonding moments together. 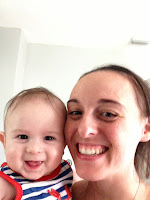 Sara is a first time, stay at home mom to her 5 month old son named Nathan. She has been married for about 3 years now and lives in Valrico Fl.