As we all know, every baby and every nursing relationship is different. Some babies are calm and easy going, others require a little more attention. Some babies latch on like professionals and mom and baby have no trouble nursing, others have every problem under the sun. Here is a guest post from my friend, Wilda, about her very different nursing relationships with her two children.

My breastfeeding journey started on April 22, 2011, when my son was born via emergency C-section. He was then taken to the Neonatal Intensive Care Unit (NICU) for being non-responsive and I didn't get to see him for the first 36 hours of his life. I "wasn't allowed" to try and nurse either because of all the medications they had me on. Of course, they gave him formula via feeding tubes to "keep his sugars up". After we were out of the hospital, our struggles continued. He never latched at the hospital and he didn't latch when we got home. In fact, he didn't latch until he was 6+ weeks old. Those first six weeks were full of tears from both of us as well as pain, engorgement, physical healing, and, to make it all worse, my body did not respond to the pump and nothing would come out when I pumped. I tried my hardest to help him learn how to latch. During that time, I met the most caring state worker I have ever encountered. Lauren Johnson helped me daily by answering questions, meeting with me, showing me new nursing positions, telling me what the best choices were if I needed to supplement, and just saying ''Good job Mama, keep going. You're almost there''. Honest and sincere support, that is all you need when you struggle during those first months with breastfeeding, which I did not receive at all from family or other friends. I just kept receiving comments like "Why don't you just leave all passion for it (breastfeeding) aside and just give him formula?", "You had formula too and you're fine'', "Stop wanting to expose yourself to people, feed him at home so he's not hungry when you go out.", or "Wait until you see a bathroom so you can feed him in there". But I was determined to help my baby learn how to latch. Around 6 weeks he just suddenly latched on and he didn't stop doing so until he was almost 20 months and I was pregnant with baby sister. He weaned himself by choice and I still miss those days but I will always treasure each and every memory I have from his breastfeeding months.
With my second pregnancy, I was even more determined to make breastfeeding the only way of nourishing my new baby. I read more literature and still kept in contact with my now amazing friend, Lauren, who never ceased to say "You got this mama". Our new baby arrived in a beautiful planned home birth and latched within minutes of being born. From that moment on, I knew she was going to be a "boobie monster". However, she had a bad latch that started hurting my nipples and, for the next two weeks, we would work on her latch during every single nursing session to make sure she was doing it right. We went through many nights where the pain of her latch was unbearable and to the point of being completely raw and bleeding but, again, if it wasn't for all the support, we wouldn't still be breastfeeding. This time around, Lauren had her hands a little more busy with her new baby boy but never stopped communicating with me to make sure I didn't quit on a bad day. I also had my husband completely on board as well as my midwife and another friend. Around 8 weeks postpartum, I suddenly did not feel any discomfort when she was nursing, she had finally latched on properly.
A month ago, I was offered a job and I took it so we had to start preparing for my going back to work. We tried so hard for J to take a bottle of breast milk or even a sippy cup. We tried and tried and tried and nothing worked. My first day of work arrived and baby girl had a rough first day but we survived. That was on Monday. Today is Friday and she's already taking breastmilk from a bottle from her caregivers and shenurses almost non stop when we are together. This whole journey has had a lot of hurdles and rough moments but we were always determined to make it work. Today baby girl is 31 weeks and we are still breastfeeding without plans to stop anytime soon. I want to say thank you to those of you that made this possible. To my husband and best friend, who was there keeping me hydrated and nourished, and would take care of toddler during those hard first weeks, my two friends, Denise and Lauren, and to every other mama that has crossed my path and has become an inspiration. Thank you. Our babies and I are really grateful for you. 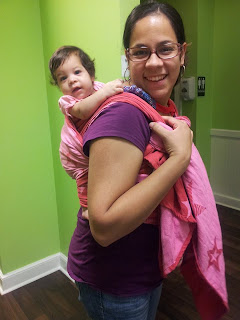 Wilda is 31 years old, is married and is mom to two beautiful babies. She is passionate about life and is against abortion. She loves to laugh, cook, and go to theme parks. She also loves music and dancing and would love to have more babies some day.